“I am not the fuel nor fire, but the spark. The darkness in light and a light in the dark”
Photo by Ariock Van de Voorde

A founding member of Black Lotus Kult, Kindle utilizes many different styles to celebrate the spiritual, sensual and unusual through her art, with a primary focus on dance and movement. Her formal instruction in modern bellydance includes working with Rachel Brice to become a certified teacher of the 8 ELEMENTS™ of Belly Dance (successfully tested in Initiation, Cultivation, Culmination and Transmission, and received her Teacher’s Certification in November 2016), learning the Unmata style from Amy Sigil and Dahlia Moon (completed Levels I & II Unmata ITS and working towards a teaching cert), and attending countless classes and intensive workshops with the likes of Zoe Jakes, Sherri Wheatley, Mardi Love, Colleena Shakti, Ashley Lopez, Kami Liddle, Travis Jarrell,
Monica Cooley and many more.

Kindle performs at events coast-to-coast, and currently teaches in Nashville.

In order to be reborn, all things must die. And in that moment, just before the cold takes you, and we give in to our death, the mind is still transfixed on the life around it. These Dark Deities will dance for us, and seduce us into their loving and deadly embrace. 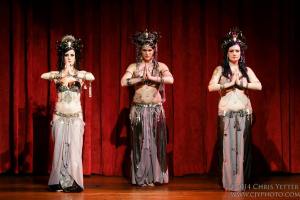 At Circadia with Maureen and Medea – Photo by Chris Yetter

Bathory vowed that after death, her soul would return & inhabit a new body – Photo by Drumroll Studios

Kindle channeling a Third Dynasty Isisian Priestess. In her, Nephren-Ka chose the wrong woman to scorn. To avenge her lover’s death and to save his soul, she performs an act of Typhonian Tantra which transubstantiates her blood to poison, which she ritualistically feeds the Black Pharaoh in order to bargain an exchange of souls with the Gods of Death – Photo by Ariock 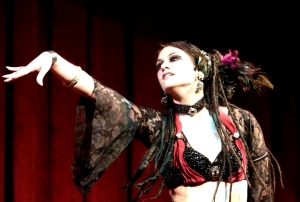 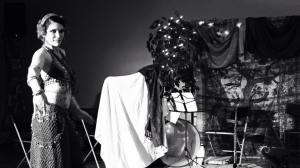 One response to “Kindle Cimmerian”