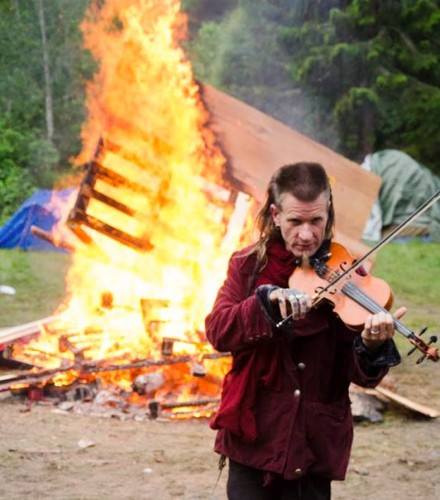 ORRYELLE DEFENESTRATE-BASCULE is a mage who brings what s/he finds Elsewhere back to our world via artistic Work.

We’ve worked with Orryelle in certain occult Orders and s/he brought hir talent to the BLK Celebration in 2011 as we celebrated the 25th Anniversary of Starfire Publishing. 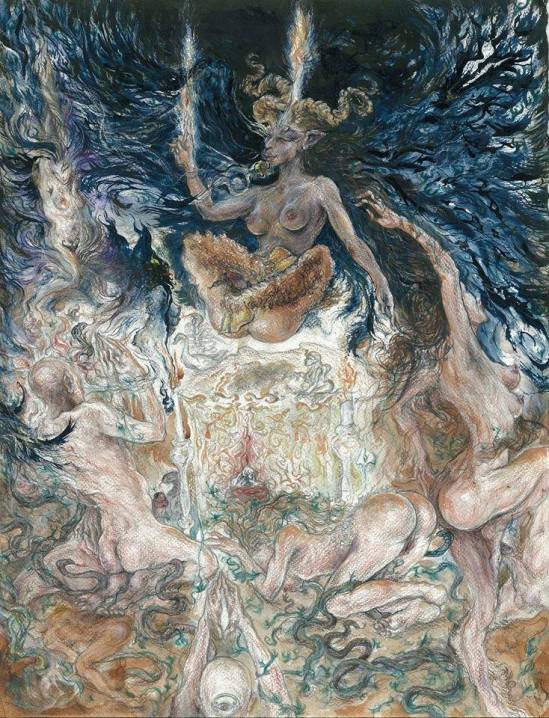 “Temple of Baphomet” by Orryelle – Inks and Watercolour, 2016

BLK – Since we last saw each other, Distillatio was released, marking the final volume The Tela Quadrivium “book-web”. Can you tell our readers about this series, and its significance to you?

Orryelle –  The TQ was a 9-year project of four alchemical art-books progressively published by Fulgur (UK), which interweave to form a four-fold bookweb. Although each can also be viewed and read in itself, further pictorial narratives emerge when the four volumes are placed in a mandala and read around in a spiral formation, turning pages of each progressively to see the links revealing new sequences of visual and symbolic continuity. Thus, the cyclical nature of alchemical processes is revealed. Some pictures even connect graphically as well, and they all connect conceptually. I’m really happy with how the series came out, it was an intricate project and Fulgur did a wonderful job of helping me to realize it.    The ritualistic process of creating these books and delving so deeply into the alchemy of the phases each represented (red, gold, black, and white/colours) was transformative. It’s also quite liberating to have ‘finished’ it, though of course the work continues being cyclical and infinite. Since the completion of the bookweb I’ve been thoroughly enjoying creating paintings which are things unto themselves, not having to think about how the image fits into the book or the series of books; in fact often not really even thinking at all, just letting my subconscious do its thing…

BLK – Your “Book of Kaos” Tarot is highly regarded, and tends to command a small fortune on the second-hand market anytime available copies dry up. What led you to create this deck?

Orryelle – Ha, its actually quite funny that it goes for high prices on eBay as it has been consistently available direct online for the last decade or so! Unlike the Tela Quadrivium (the first 2 volumes of that really are rare) it is not a limited publication, I guess some people are willing to pay a bit more for a signed copy, and others just don’t check if its available elsewhere when they see it on eBay etc. The Book of Kaos Tarot is actually the first thing I created in terms of magical art, I began it as a neophyte learning more about each card as I created it, over a concentrated 2-year period. A decade later I went back and re-drew half of the major arcana with added layers of symbolism and began self-publishing it a few years later. 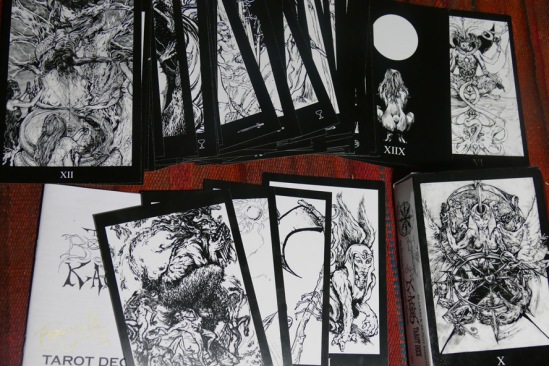 The Book of KAOS Tarot

BLK – You are immersed in many different forms of art. Although many have read your books, and viewed the drawings and paintings in them, you also sculpt, tattoo, create music and film, etc… How do you determine what medium to work in when trying to manifest an idea?

Orryelle – I don’t decide on media as such very often, usually the ideas come within the context of a particular mode of expression. However working in so many different mediums I find they do cross-pollinate each other progressively sometimes: Poetry may become a song may become part of a musical ritual theatre piece, a painting may provide an idea for a sculpture or film, or less obviously even a drawing may become prose, etc. Sometimes I will switch mediums deliberately to get a different perspective on an idea or current of energy I am working with… 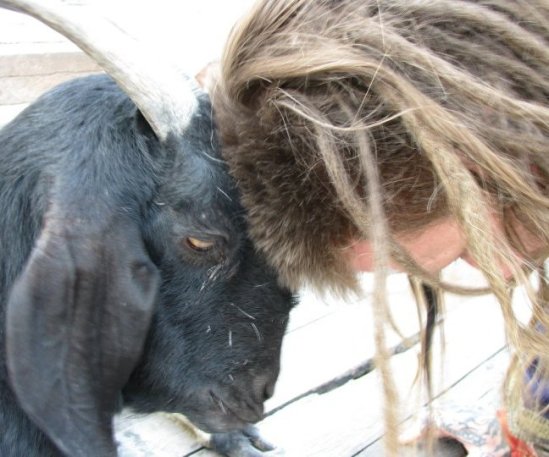 Orryelle and a friend in India

BLK – On the subject of varied art, you are currently working to produce/release a film and kinetic composite statue of “SOLVE et COAGULA”. What can you tell us about this project?

Orryelle – Its a further development (again, progressive media!) of what was originally a live musical ritual theatre work performed in 2011 in Australia and USA, and around Europe in 2012, which in turn was inspired/triggered by some images of Baphomet as ‘composite Sabbat Egregore’ in the Tela Quadrivium books.
I’m really excited about the film and hope the current crowd-funding campaign is successful to be able to fully realize it, involving some great post-production people to make this a more professional film than my previous self-edited video works. Unlike previous adaptations of live ritual theatre productions I’ve done, this will be re-created especially for the cameras so they can come in close with no audience and we can get everything just right. It will also include intricate stop-animation of the kinetic statue assembling -a life-size sculpture made from 33 smaller figures which fit together…
SOLVE et COAGULA takes as its premise the myth of Orpheus, ancient Thracian bard who -apparently due to his lack of presence- was torn limb from limb by the Maenads, primal wild-women in the retinue of Dionysos, God of drama and intoxication.
Yet this ending of a classic(al) tale is just the beginning of ours, for I have always wondered what happened to the immortal head of Orpheus (having already illegally visited the Underworld to attempt to rescue his lost love Eurydice, he could never return there) after it floated off down the River of Lament, still singing woefully, disembodied and bereft of intent.
You can see the full synopsis and a promotional video/trailer I recently made at https://www.kickstarter.com/projects/1402583612/solve-et-coagula-feature-film-and-kinetic-composit/ I’ve offered lots of good rewards there too, including the last two volumes of the Tela Quadrivium (Solve and Distillatio), signed Book of Kaos Tarot, and lots of original art at reduced prices. We are a little behind schedule in relation to how much we need to make daily to achieve the goal, so hope for some more pledges in this last 2 weeks of the campaign.
This film and redesigned statue is my first artistic major project since completing the Tela Quadrivium -after a few years of freeform experimentation and creating mostly smaller self-contained works, I’m ready for another epic… 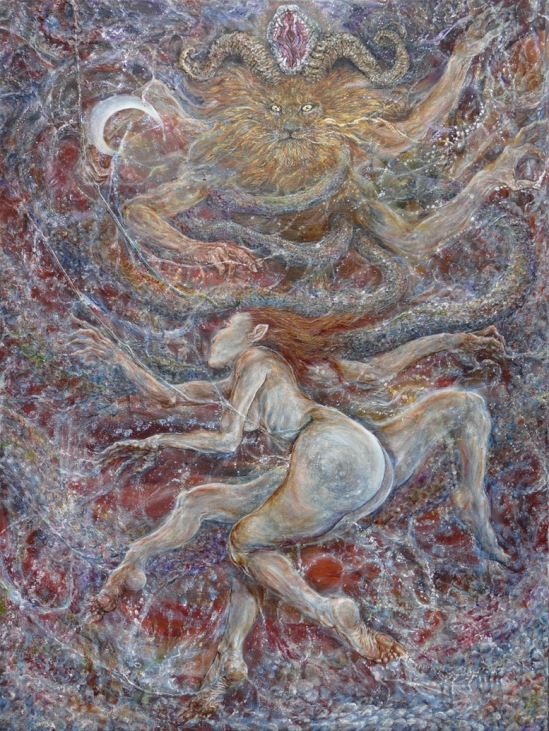 To learn more about, and to support Orryelle’s Kickstarter project, click HERE

One response to “Orryelle Defenestrate Interview”